Along For The Ride 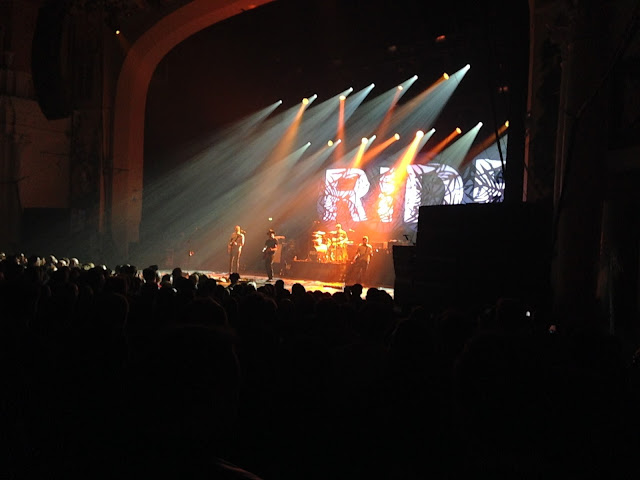 An apologetic, yet simultaneously confident voice greets the crowd at the Academy. Like Hugh Grant in a Humphrey Bogart hat, holding a Fender. ‘Hello Brixton, we’re Ride. Thanks for coming.’

Mark Gardiner (the man in the hat - who'd have thought?) seer into a song that I’ve not heard for maybe two decades but it sounds… well, it sounds fantastic; absolutely up to date and somehow not of its time at all.  Loz, Steve, Mark and Andy are ripping through Leave Them All Behind. Possibly their finest moment. They're back together (again, who'd... etc.) and it’s a good thing that they’re back together; good for them, good for fans, good for those who were born the year they first played. I wonder what Taylor Swift would make of them.

Ride were a good group. Notice I didn't use the word great. Somehow, the apologetic air haunts them still, although as I stand watching them this October night 26 years after first seeing them, I think maybe that adjective might start getting used. They were Creation Records’ first popstars, a band on the cusp of greatness when they got swept away on the tidal wave of Grunge then crushed swiftly by the red double decker of Britpop.

By rights, they would have been the first band I signed. I got my first music business job working as a talent scout at East West in 1989. Within days, I was coursing through boxes of unsolicited demo cassettes that had been abandoned by my predecessors and the rest of the A&R department. Dutifully, I listened to the first few bars of each of the standard three tracks on each one and then packaged them up in pristine Jiffy bags to be returned. Such were the pre-Internet days of the record business: Tanita Tikaram, Enya and The Ginger Prince provided us with the funds to spend on the R&D and I felt we were almost offering a public service. My rejection letters were masterclasses of tact and evasion “Thank you for making the effort to send us your material… It always boils down to a personal opinion so if we’re saying no that doesn’t mean you should give up – somebody else might love it!” Or words to that effect. I’ll try and dig out a rejection letter but for now here’s a collection of all the misspellings of my name on demos sent to me, which I made into a complements slip. 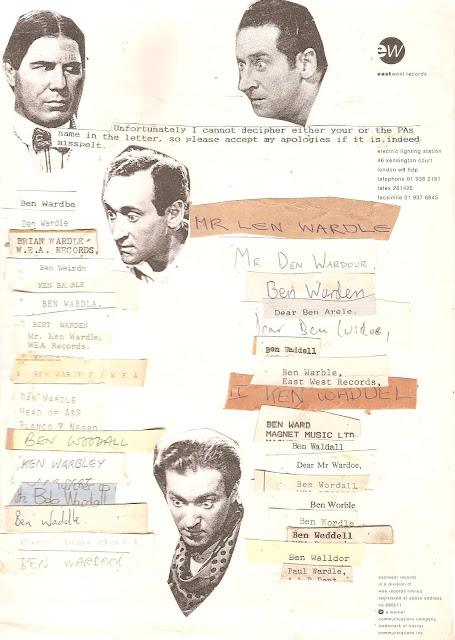 Ride were, as you might expect, not discovered via an unsolicited demo cassette. I heard about them from a local Oxford music paper called Gig. I believe Ride’s future manager, Dave Newton, had something to do with Gig but anyway, it was he I spoke to at the paper. Nobody tells you how to be a talent scout so I just did the things I imagined a private detective would do: I phoned up a lot of people who I thought might know something and asked lots of questions. Without hesitation, Dave  recommended Ride and a couple of days later a tape arrived which was and remains the best-presented demo I ever came across. Ride started as they meant to go on – everything had been thought through: 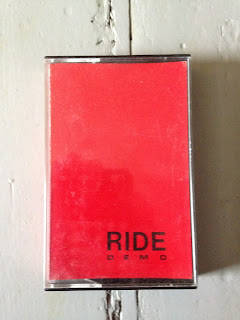 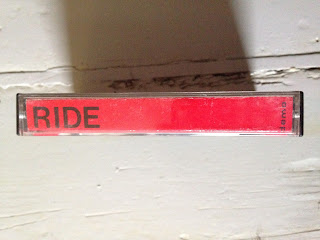 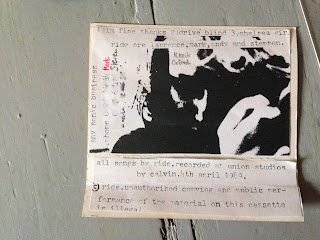 The block capitals logo, kept for their entire career, was there from that very first demo; the solid, defintive colour; the minimalism; the iconography.

Musically too, it was amazing. Both future classics Chelsea Girl and Drive Blind were included as well as a third (and first in the running order) I'm Fine Thanks (later available on the box set, completist chums!)

I went to see them live and it was clear they had been blessed: It all. That’s what they had. A great guitarist, a charismatic, hurricane of a drummer, a stoic, monolithic bass player and a ludicrously handsome lead singer. They were young, they were intelligent and they played a cover of Tomorrow Never Knows.

I couldn’t get much interest from the rest of the A&R department but Cally (a legend who I have written about here before  and had the pleasure of interviewing earlier this week for the podcast) loved it as much as I did.  He had signed a kind of UK version of Jane’s Addiction called Underneath What who despite being signed to our multinational powerhouse, had just released their debut single Firebomb Telecom on a small label called One Big Guitar for credibility’s sake. Cally suggested we convince Ride to do the same – we wouldn’t even sign them, just put it out for goodwill and see what happened. Again, the public service nature of how some of us viewed the job is apparent. Cally told me recently that he never thought the band would happen if they signed to East West and he may have a point. But then again Geoff Travis had done the Blanco Y Negro deal with WEA and Jesus and Mary Chain were doing quite well thank you very much.

The Reed brothers as it turned out, were Ride’s favourite band.  Cally and I found this out when we travelled to Oxford to meet them. They were hugely polite and well behaved but genuinely inspiring. We suggested doing some recording with them. One thing major record labels did all the time in the 80s and 90s was offer artists ‘demo’ time. Normally budgeted at around £500 it was both a gesture of goodwill (public service!) and a way of avoiding making a foolish A&R decision by simply signing a group because you’d seen one exciting gig. Looked at another way, it was a way of avoiding making an actual decision whilst keeping your options open. 'Umming and Erring' as the perenniel  A&R joke used to go.  I did it a lot at East West because I couldn’t get my boss interested in most of the things I brought in. But that’s another blog.

The band quickly agreed to us recording them so we could put out a record. I can’t remember any other record companies sniffing around. Major labels were all looking for the next Deacan Blue or U2. Even a handful of years later, the kind of scenario where a band this good, building a fanbase locally would be able to exist without their every show being rammed full of industry chancers. But back then, when Taylor Swift wasn't even 1,  it was just me, Cally – and one other person I’d told about them, Mike Smith who was at MCA Publishing. He couldn’t get any interest from his boss either.

Cally and I paid for some demos and recorded them in Oxford at same studio where they had recorded the demos. If you look back to the pic of the demo you can see Cally's distinctive writing in pencil '16 track Oxford'. My scrawl is next to the phone numbers, where I've put Mark and Steve's names next to the numbers (I've obscured the numbers just in case). You see the slick way we worked: proper grown-up A&R man and trusty scout. We mixed it in London at a studio called Arkntide of which I have a vague recollection. There is however one crystal clear memory.

Crucially, when it came to the final mix, the band and manager trusted myself and Cally to man the faders to get it sounding how we thought would best show off the band's brilliance. It was the first and as it turned out, only time that a band let me get my own mucky paws directly onto their work. All respect to Ride, they knew we loved them and perhaps did it out of thanks. In addition to that Cally and I got a credit for remixing it. Not in our actual names, mind but in alternative monikers based on that favourite band of Ride's you remember from earlier. They switched Jim and William Reid's names to James and Bill and lo! Cally and I were immortalised.

What happened next happened fast. Dave sent us transparencies of the artwork, the beautiful roses artwork that I'm sure you remember if you're bothering to read this: 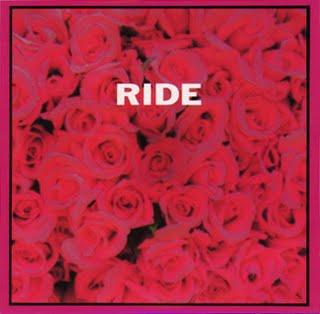 Then suddenly...
Ride rose swiftly after the release of the Ride EP. Cally and I wished them no ill because they were great and deep down we kind of knew that Creation was a better label for them than us. As well as this, Dave and his charges remained very loyal: we got our credit on the record and even a decade later they credited us on the OX4 box set and indeed sought us both out to give us a copy each.

And now here I am watching them on stage. They play two sets, one comprising the imperial period from Going Blank Again then they return and give us the whole of Nowhere. They've just returned from the US and they're going back again after they finish in the UK. The signs of this relentless touring are not that they seem jaded and exhausted but rather they have become the band they always threatened to become in their heyday: Loz's drumming is tighter, the harmonies are more strident, the playing simply better. They are as muscular as the block capitals behind them: 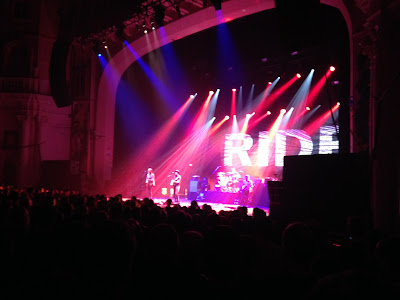 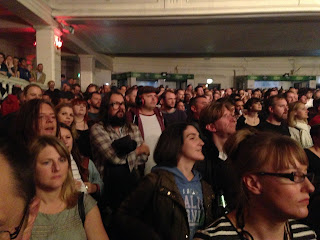 After the gig I decide not to go backstage and shake hands with them all 26 years later. It would be lovely of course, but I suspect it being a London show that there are many folk like me who will be forming an undignified queue outside the dressing room.

I say goodbye to the friends I came with and walk back through Brixton humming Drive Blind and Chelsea Girl. After everything, those two songs from that first demo are the songs they save for the encore.
Posted by Ben Wardle at 21:23

I was born the year after the Beatles broke big, grew up on Pertwee, Peel and Rotten, went to school in South London, fell in love with a German, studied it at Manchester Uni, played bass, guitar and drums, got a job in A&R, signed some famous groups, signed more non-famous groups, got married, got employed by Damien Hirst and fired by Joe Strummer, learned to type and started writing ...